Grimes: Californians Trying to Get Back to Work Have Been Criminalized by Governor

California Globe’s Katy Grimes has been reporting on the thefts of our Civil Liberties under the guise of “keeping us safe” during this Quarantine panic.  From the article:

When the California Legislature reconvenes after being recessed for 7-8 weeks during the statewide COVID-19 lockdown, expect to see a complete political meltdown. And finger pointing. And overreactions. And an ongoing lack of leadership. And then watch the legislation and ballot initiatives to raise taxes on the very people who lost their businesses and jobs because of Governor Gavin Newsom’s authoritarian statewide lockdown.

The protests across the state Friday made very clear that California’s residents are fed up with the stay-at-home orders and need to get back to work – if their businesses are even still there. A good one-third of the signs at the State Capitol protest were about the governor – one sign said, “He freed the felons and imprisoned the free.”

Most of all we need to ask why police were in riot gear at the protest. We need to ask why they arrested a handful of moms and dads at a protest asking the governor to open up the state. These people are being destroyed by the governor’s order. They want to get back to work.

Notably, police were far less aggressive and few arrests were ever made at Black Lives Matter rallies, which were destructive and violent. Same with the Antifa protests where property was destroyed and Antifa thugs physically attacked bystanders and reporters. Police appeared to have been given stand down orders at those protests. Why go after a bunch of patriots? Were those the orders of the governor? 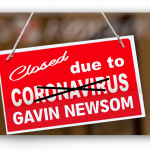 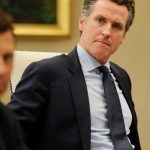