The Light That Was Avi

The following was published in the Tribute Book for the 2016 Heroes of Conscience Dinner honoring Avi Davis.

The Light that Was Avi
Karen Siegemund, PhD
Chairman, The American Freedom Alliance

The outpouring of support for AFA and our continuing Avi’s work has been heartwarming. But then, that shouldn’t surprise anyone:  if you knew Avi, you know that he was a miracle of a man.

He was one of the most learned, erudite and intellectually ravenous men I’ve ever known.  He lived his life with gusto, and he dove into intellectual, spiritual and just plain adventurous pursuits with equal energy.  His thirst for conversation – open, intelligent, informed conversation – on an enormously wide range of topics was constant, and we who knew him were the beneficiaries of exchanges that were head and shoulders above our normal, everyday discourse.  A dinner at Avi’s house, just a simple dinner, left one feeling hopeful for the world when such great men, such great thoughts, such great passion exists.

And now, he’s gone.  Those simple dinners are over.

And yes – AFA only existed because of the intellect, energy and passion of Avi, empowered by a number of donors who believed in him, in his ability to do great things.  There’s no question about it: Literary Cafés were what they were because of Avi’s erudition and well-conceived questions he posed to authors of books he’d selected because they interested him and he thought they’d interest us, too.  The Cinema Gateway events were showcases of films most of us would never have discovered otherwise, but that were informative and stimulating.  And of course, the conferences!  The conferences were masterpieces.  Their caliber was beyond that which one might find at a university, with the added advantage of being correct and true, rather than politically correct and agenda-driven.  If you’ve ever been to one of Avi’s conferences, then you know how enriching they were, and what a breath of fresh air they were – no, not a breath, but a crisp, steady and cleansing wind.

Avi was the mind behind all this, and with the support of an array of donors, those who gave large amounts and small ones, these great things were accomplished.

And while energy and intellectual curiosity such as his might have a tendency to be too diffuse, over the years AFA’s mission came more sharply into focus:  defending Western values and ideals against five dominant threats that seek to destroy them.  The events he scheduled throughout the year helped educate us about those threats and led us to those who were fighting them.  His Heroes of Conscience dinners celebrated those whose courage in standing up for truth in the face of bigotry and politically-oriented agendas came with a cost.  He, and AFA, shone a bright light on those forces that seek to destroy, and also illuminated in a welcoming light those engaged in fighting that destruction.

And now, he is gone.  But the values that underlie AFA are still there. The mission is as important now as ever – in fact, daily, it feels more so.  It is imperative that we stand up against the forces that still seek to undermine this nation, and that we continue to defend those values and principles which have brought freedom and prosperity to more men than have any others ever before – that is what AFA does.  He showed us the way, and we have chosen to continue it, not only to honor him but because it’s the right thing to do.

The light that was Avi continues to shine. 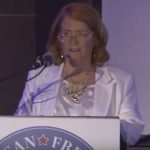 Charting the Future of AFANews