The American Freedom Alliance stands strong in defense of Western Civilization and the values that give us the success, the strength, the achievements that we enjoy.  Without freedom to create, to believe, to speak, to act, to own, human nature’s potential is stunted; but where these freedoms exist, we are able to soar.  “Life, liberty and the pursuit of happiness:”  these words embody the fundamental needs of humankind.  And it is only Western Civilization that embraces them – and it is AFA’s mission to find ways to ensure that that most fundamental need – that  of freedom – is protected and maintained.

The roster is here: 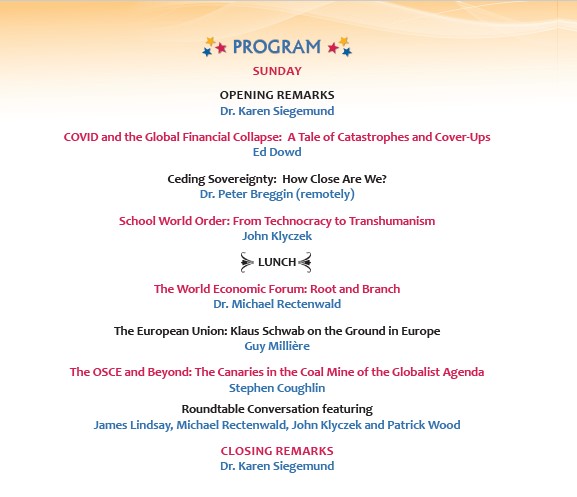 And the photos are here.

PROPAGANDA: Is Anything you know, real?
AFA’s JUNE Conference 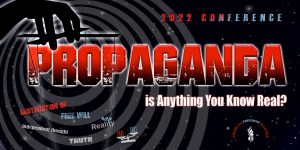 On March 1, the Committee on the Present Danger: China gave  a “Battlespace Threat Briefing” on the topic of China.  Frank Gaffney (Vice Chairman of the Committee; Executive Chairman, Center for Security Policy; President and CEO, Save the Persecuted Christians) and Brian Kennedy (Chairman of the Committee; Former President, Claremont Institute; President of American Strategy GroupClaremont Institute, The American Strategy Group and Chair of the Committee) were joined by Col. John Mills (Former Director, Cybersecurity Policy, Strategy, and International Affairs, Office of the Secretary of Defense) and Dr. Greg Autry ( Professor at the Marhsall Business School at USC, and served on the NASA Agency Review Team and as White House Liaison at NASA.)   This Threat Briefing was a powerful and sobering look at the present – and growing – danger from China and what each of us can do to help counter it.
For more information on the committee, their work, and the threat that China poses, click here. 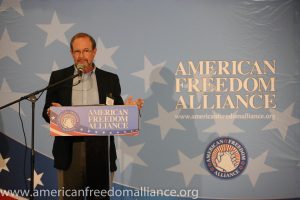 You may have seen him testify before the Senate, on Mark Levin, on FoxNews, with Dennis Prager.

This courageous and brilliant researcher spoke at AFA on November 18th about the terrifying power of Google to surveil, data collect, and manipulate including opinions related to elections.

Her book, The Truth is No Defense, is a must-read for anyone concerned about the loss of our freedom of speech.

And read about it here and here 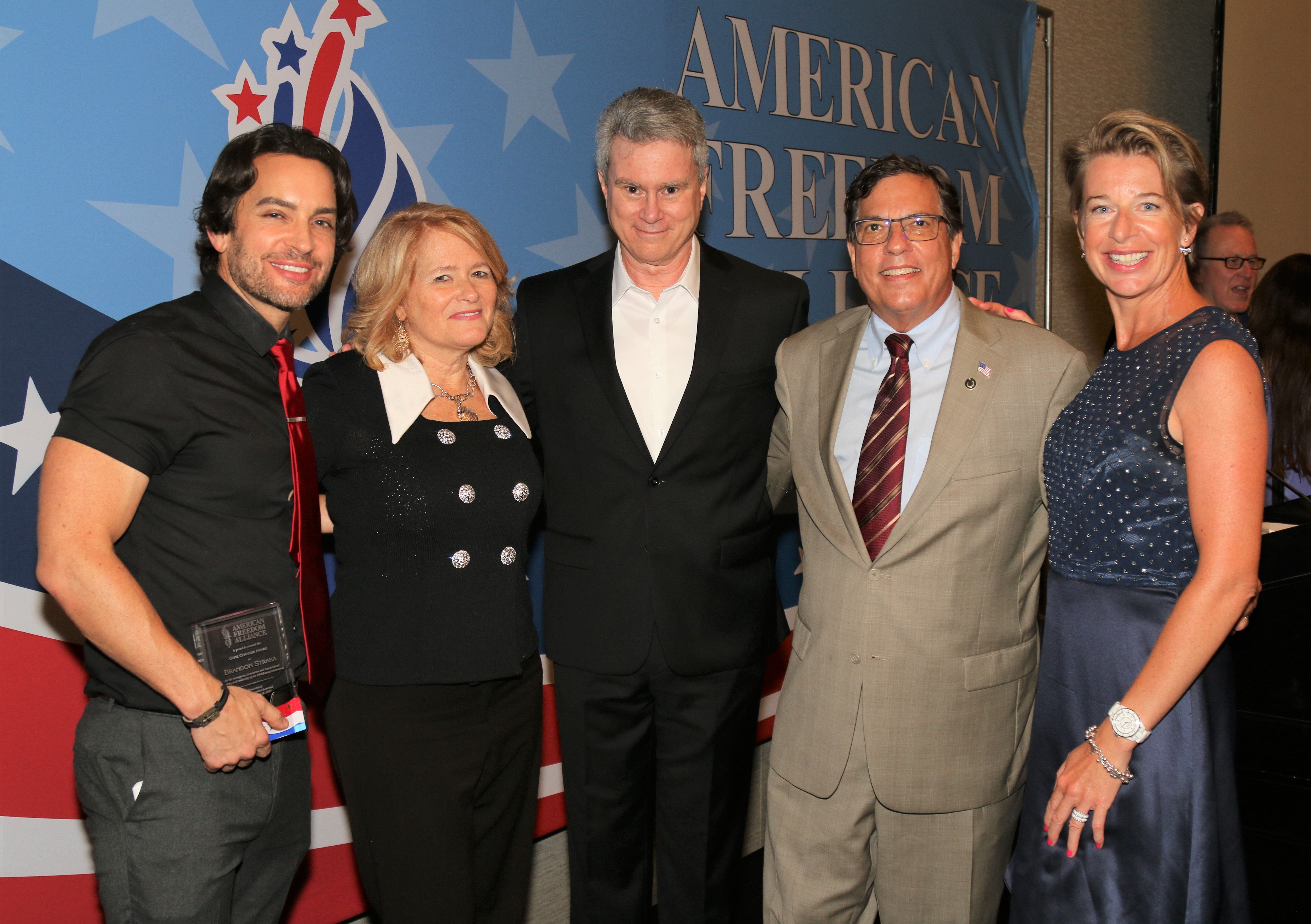 Read about our
13th Annual Heroes of Conscience Awards Dinner

Some highlights from the AFA Long March Conference

Read about our 12th Annual Heroes of Conscience Awards Dinner 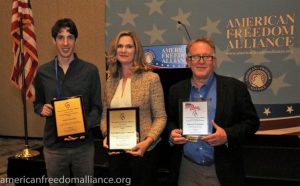 AFA holds a series of Literary Cafes – informal, salon-like gatherings to discuss a newly published book with the author. These are always engaging, heartening and inspiring, not to mention extremely informative.

April 13:  Senior Editor of National Review and Fellow of the National Review Institute Jay Nordlinger spoke on his new book Digging In:  Further Collected Writings
You can watch the video here:

May  7:  Michael Medved’s The American Miracle: Divine Providence in the Rise of the Republic.
Watch our conversation here:

Our 2017 Heroes of Conscience Dinner celebrated David Horowitz, and we presented our inaugural AMERICAN FREEDOM AWARD to Philip Haney.  Geert Wilders, Hero of Conscience honoree in 2009, delivered the keynote address.

Read about it here.

And the acceptance speech delivered by David Horowitz, our 2017 Hero of Conscience, is here:

Our past cafes in 2016 were
June:  Jesse Lee Peterson and his new book  ANTIDOTE:  Healing America from the poison of victimhood, hate and blame

July:  John L. Hancock and his latest book Liberty and Prosperity:  How the Saxons created the modern world

We also host  annual Heroes of Conscience Award dinners where we honor individuals who have suffered negative consequences as a result of their commitment to the truth.  Our 2016 dinner honored Avi Davis, the founder and past president of AFA who passed away in December of 2015.

For videos and photos from the dinner, click here

And just this year we held our first annual AFA Summer Picnic.

Some videos from this picnic are here:

AFA is delighted to host a dinner with Phil Haney.  We are also encouraging our members to hear him speak at one of the local clubs.  Details on the meetings and the dinner coming soon.

Screening of Trevor Loudon’s THE ENEMIES WITHIN

Artist Carrie Zeidman’s book GHOSTS is an exciting departure from AFA’s usual selections.  A book of truly stunning photographs, GHOSTS is a haunting work, one which evokes, page after page, key events in American and global history where freedom was fought for.  From a review of GHOSTS:

The book includes images Zeidman shot of places with historical significance to the Revolutionary War, the Civil War and World Wars I and II, Zeidman has digitally added in images of soldiers, prisoners, and even scenes of death and destruction, to accurately reflect what happened at the site.

“The ‘Ghosts’ images, to me, are an interpretation of what I saw in my mind when I stood on the ground where these tragedies occurred,” Zeidman says. “There were battlefields where thousands of men lost their lives in a single day; tropical islands where young sailors woke up in paradise and by nightfall were forever entombed in their own ship; beaches where heroes overcame their fear and bravely did what needed to be done to save or bring freedom to people they would likely never know.”

Zeidman’s digital artistry background is evident in the book. In 2012, she was given that year’s Distinguished Artist award by the city of Cupertino.

Carrie’s knowledge about each of the sites, her deep and somehow spiritual connection to these sites and to those who gave their lives for freedom, and her commitment to honoring them are guaranteed to make this Literary Cafe a truly unique experience.  The beauty of the photographs and the stories they tell will leave you feeling profoundly grateful for those who are now only ghosts.

Carrie Zeidman is a digital artist and photographer whose passions are photography, art, travel, and history, all of which are found in Ghosts. She is a tenth generation Californian and a fourteenth generation American.  She has won several awards for her work, including being named Cupertino Distinguished Artist of the Year in 2012. Her work has been represented in galleries, and her painting Freedom Rises in the East is in the permanent collection of the Mauermuseum at Checkpoint Charlie in Berlin, Germany. She lives in Cupertino, California with her husband Bob, who is also an author of several books.

Twilight Over Europe by Guy Millière

After publishing over 40 books in his native French, AFA Fellow Guy Millière has just published his first book in English, Twilight Over Europe:  Europe’s submission to islam and to muslim anti-semitism.  From the book:

Europe is heading towards an increasingly uncertain future. Debates on the impact and dangers of Islam are even less possible today than five years ago. Demographic trends are irrepressibly moving in a direction that is Muslim. Radical Islam in the Middle East and in Europe is rising ever more rapidly, with no one lifting a finger to stop it.

Coming so soon after our conference on Islam, we are very excited to continue the conversation on this critical topic.  Guy was one of the speakers at  the conference, and his talk about the loss of Europe and the role that America can and must play on the world stage as a bullwark against further loss of the West to islamic penetration was terrifying and accurate.

Guy Millière is a Distinguished Senior Advisor to the Gatestone Institute, New York and a Fellow at the American Freedom Alliance. He was President of the Turgot Institute, a think tank based in Paris. He published more than forty books on the United States, Islam, the Middle East, Israel, and thousands of articles in French and in English. He was awarded the Classical Liberal Book Prize in 2004, and the Golden Menorah by B’nai B’rith France in 2012 for his fight against anti-Semitism and for human rights. He published his first book in English in 2016, Twilight Over Europe.

For more on past events, click here, then go to the “NEWS & EVENTS” tab at the top of the page.