The Odyssey of Western Civilization

In this eight-part Freedom Academy series, Victor Davis Hanson locates its origins in classical Greece, then traces its progress from Greece to Rome; from the Mediterranean to Northern Europe; across the English Channel to Britain; and across the Atlantic to America. Eventually, in the 20th century, Western civilization seemed to lose faith in itself, and so currently we find ourselves stuck in the nihilistic dead end of postmodernism. But Hanson concludes the series with a hopeful prediction about the rebirth of the West.

The full playlist is here

1) The Origins of Western Civilization: What Is It, and Where Did It Come From?

The West arose in a particular time and place, Greece in the eighth century B.C., during the dark age that followed the collapse of
Mycenaean civilization. An agricultural revolution gave rise to the autonomous yeoman farmer, backbone of the democratic city-state. Their innovations included constitutional government, free-market economics, private property and individual liberty – concepts unknown in Mycenae, not to mention Egypt and Mesopotamia. Here the West begins.

2) The Individual Versus the State: Sparta Against Athens

Greece’s two most powerful city-states offered competing models. Sparta was more authoritarian, limiting its democracy to an oligarchic elite supported by serfs. Athens extended citizenship to a wider group, but often fell prey to the tyranny of the majority. It was Rome that finally managed to square the circle, by combining the best elements of both approaches. The Romans rejected oligarchy, but created a republican system with checks and balances that reined in democratic excesses.

The Mediterranean Sea functioned as antiquity’s superhighway, connecting Asia, Africa and Europe in ways that allowed for a dynamic exchange of goods and ideas. Blessed with relatively calm weather and with numerous islands to serve as way stations, the sea was readily navigable. First Athens and then Carthage built maritime empires, but it was Rome that finally turned the Mediterranean into mare nostrum – “our sea.” By the first century A.D., the Romans’ dominance of the Mediterranean allowed
them to create an integrated empire state that stretched some 2,400 miles from Spain to the Levant.

Rome thrived by gradually Romanizing the Mediterranean world: absorbing and assimilating conquered peoples and turning them into Roman citizens. But eventually Rome became a victim of its own success. As the empire grew ever larger, the homogenization process broke down. In the countryside, small farms gave way to vast estates worked by slaves, whose patrician owners eventually controlled most of the empire’s wealth. The yeoman farmers migrated to the cities and became a mob, to be pacified with bread and circuses. Shorn of its republican virtues, Rome lost its fighting edge. Soon the barbarians were at the gates, and Rome no longer had the strength – or the will – to resist. The city finally fell in 476 A.D. But was that really the end of Rome?

5) Byzantium and the Agents of the Renaissance

When something is characterized as “byzantine,” it’s generally not a compliment. But Byzantium, a.k.a. Constantinople, gets a bad rap it doesn’t deserve. After Rome, the city, fell in 476, Rome the empire lived on in the eastern Mediterranean for another 1,000 years with Constantinople as its capital, preserving Western civilization through the so-called Dark Age, and serving as a Christian bulwark against the onslaught of Islam. And, when Constantinople finally fell to the Turks, Byzantine scholars fled west and planted the seeds that would flower as the Renaissance.

6) From the Mediterranean to Northern Europe: Why Did Power Shift Northward in the 16th and 17th Centuries?

Western civilization was born in Greece and Rome, but today Greeks and Italians must defer to Europe’s northern nations, especially Germany. Power shift northward because the south for centuries was locked in a life-or-death struggle with Islam, leaving the north free to develop cohesive nation-states – and to embrace the Protestant Reformation, which viewed capitalism with more enthusiasm than did the mostly Catholic south. And the north looked out on the Atlantic, the pathway to global trade, while the enclosed and embattled Mediterranean world ossified into a backwater.

7) From British to American Centuries: The Anglo-American Contribution to Western Civilization

Modern, multicultural America traces its uniqueness among nations to one culture in particular: that of Britain, from whence we originally came. Britain’s geographical isolation as an island nation nurtured the development of a tolerant, resilient political system that favors peaceful solutions negotiated among peers to violent solutions imposed from above. Inheriting this British system, America tweaked it to place even less emphasis on hierarchy, and more on individual freedom.

Ever since the days of classical Greece, Western civilization rested upon a bedrock of idealism and civic virtue. Then, amid the confusion and disconnection created by the Industrial Revolution, the West began to turn away from its traditional emphasis on religion, patriotism and family values. Nowadays we all wallow the nihilistic chaos of the postmodern world, where irony and cynicism are the dominant modes. But we long for a rebirth of the values and traditions that sustained Western civilization for 2,500 years – and one day may do so again. 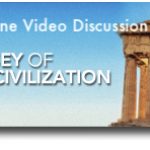 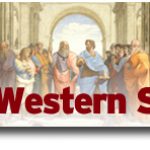