Totalitarianism, Sovereignty, Overreach and Looking Ahead: The Wuhan Virus

We’re all drowning in all things related to the Wuhan Virus, and whatever our personal feelings are regarding whether or not the measures currently being taken are too much, too little, not the right ones, just the right ones (are we all Goldilocks now?) it’s interesting – albeit painful – to watch how all of this is unfolding.

The Virus originated under a totalitarian regime

That much is clear.  This virus and its spread originated under a totalitarian regime which, instead of addressing the initial outbreak rationally, responsibly and with the intent of protecting its citizens, did the Chernobyl thing and did everything to deny, ignore, cover-up in the early days, letting the virus, however it was originally created, run unchecked for too long.  Only in a nation that values control over its people rather than their lives can this kind of thing occur.  As the stories unfolded because of the growing pandemic, we learned about the “wet markets,” the conditions in the streets, the labs, the eventual draconian mandatory quarantines, the indescribable pollution, our dependence on China for practically everything including a gigantic percentage of our medicine and medical supplies.  Through it all, we learned about the gaping chasm between our ideological underpinnings (freedom, transparency and the value of life) and theirs (captivity, concealment, the dismissive attitude towards life), all important lessons to learn.  Their initial intent to conceal led, instead, to revelations of horror after horror.

On March 1st we hosted a 2020 POLICY BATTLESPACE THREAT BRIEFING:  CHINA.
Read about it here; it’s chilling, and the video is something everyone should watch.  One of the more pernicious elements of this is the extent to which some of our biggest funds are invested in China; untangling this will not be trivial.

For more on China:
Victor Davis Hanson:  China Boomeranging
From Gordon Chang:  China’s Real Disease: Not Coronavirus
The Federalist:  The Atlantic Must Stop Covering for the Chinese Communist Party
Katy Grimes at California Globe:  More Warnings of U.S. Dependence on Goods Produced in China, and CalPERS Investments in China’s Military

As it happens, AFA had a few months ago decided that our next conference in 2021 would be focused entirely on China – yes, our supply chain’s dependence on them and how many of the world’s pandemics originate there, but also issues related to intellectual property, mining, human rights, 5G, defense/missile development, their investment in third world countries, among other topics.  We wanted to make people aware of the threat… but of course, the Wuhan Virus situation has been a gigantic wake-up call to at least a few of these areas of concern.

It spread due to global markets and open borders

It seemed first to go to Italy but wound up with global reach; apparently the high impact of the virus on Italy was due to the import of Wuhan workers into the textile industry of northern Italy, combined with Italians’ older population and a poor (socialiazed) health care system.  From there, it began its spread throughout Europe due to deliberately easy mobility throughout the Schengen zone of Europe.

More on Italy and the rest of Europe:

On China and Iran:
The Wall Street Journal:  Strategic Partnership with China Lies at the Root of Iran’s Coronavirus Outbreak
CNN:  Pompeo on China, Iran and State Department Infections

And the measures taken to curb it are sovereigntist/nationalist

Notice how each country – country! – took upon itself its right to sovereign action to protect its citizens.
Italy imposed quarantines; Austria closed its borders and implemented various restrictions on gatherings and mandated closures of entertainment venues, restaurants etc.  Even Germany has now closed its borders.
Borders in the context of Europe is an astounding thing, and it’s heartbreaking that it took a virus, and the deaths it’s left in its wake, rather than the years-long invasions for them to assert sovereignty, and to finally, finally, turn to protecting their citizens.

“Europe” in the form of the EU has been silent  The UN doesn’t even seem to be speaking out  although, in a rational world they’d be calling for “Crimes against humanity” charges to be brought against China; further proof of the UN’s uselessness at best, and of the EU’s utter irrelevance.

It’s nations putting the health, safety and security of its people above all else that will stem the spread of this virus; it’s a nightmare that it took this pandemic to wake governments up to the primacy of their people as the core of their responsibility.

We here in the US have been tremendously fortunate to have at the helm of our government a man whose only desire ever has been to “Make America Great,” to ensure the safety and prosperity of our nation and citizens, and who was never, not for a second, afraid to assert sovereignty to do so.  That this was so unusual in the global context revealed how dysfunctional the rest of the globe had become, and the too-great extent of the success of the leftist/globalist/Marxist worldview and policies.

We’re also supremely lucky in President Trump’s wide array of actions, from shutting down flights from China and subsequently Europe, to his various public/private partnerships, to his transparency regarding every step being taken.  Has the U.S. response been too fast, too slow, not enough, too much?  For me, it’s all a lot more Goldilocks thinking.  I just don’t know.

Is there overreach?  No doubt.  Many of the measures taken are draconian – the word most often used these days.  “Sheltering in place,” a more benign expression than “lockdown” is implemented in Italy, Spain, now New York, the Bay Area, and many other locales.  Very little is open; here in Los Angeles, the freeways are a joy to drive on as they were decades ago, but there’s nowhere to go. Governments are mandating closures; others are voluntary.  But the shuttering of the nation and much of the globe… it’s surreal.  Until now, we’ve looked back on the long gas lines of the 70s as a memory of that time of “malaise.”  Ha, what a trivial thing compared to this!  Malaise?  Have you seen a child’s face gaping at empty super-market aisles, or when he’s told he can’t go… anywhere?

Some terrific articles on the preventative measures vis-a-vis the virus itself:
From Heather Mac Donald:  Compared to What?
Dennis Prager: Why the Remedy may be Worse than the Disease
Also Dennis Prager:  Coronavirus Becomes Latest Excuse for Mass Hysteria
California Globe:  Coronavirus and Leviathan:  Is Gov. Newsom Exploiting a Crisis to Expand State Government Power?  (We all know the answer to that)

Will we ever really recover from the economic catastrophe?  Will these “draconian” and often totalitarian measures ever, really, be rolled back?  To what extent can we untangle global dependencies and still maintain a healthy global economy?  How can we disentangle  our own economy from China’s?  Shoring up our own  manufacturing to diminish our dependence on China is one thing, but our financial markets will be a more complicated thing to withdraw from for reasons that range from the financial to the political.

But there are upsides.

First, that the notion of sovereignty is reaffirming itself is a great thing.  Regional and global governance structures have been shown to be useless at best.  The EU may not survive, or may reinvent itself as a trading bloc as it once was.  None of this is bad.

Second, I think this is forcing all of us to slow down, to diminish, at least for a small window of time, the hectic busy-ness that has consumed us.  While indeed the economic impact is exceedingly stressful, at the moment there’s not much we can do, so our priorities can be focused on our families, our communities, and making sure we spend our hours in ways that are productive according to a different set of metrics from before.

Third, so much that we’ve taken for granted has come into question, and some of this is a good thing.  As an obvious example, that kids need to go to school to learn…. I think this time is giving everyone the opportunity to assess what an education is and should comprise, and to consider what is really, truly, best for our children, without the tyrannical overlords of education, the unions.  Things being broken as they are affords us a great opportunity to reassess, on an individual level, a family level, a community level and even higher.

Fourth, weirdly, it may be that a lot of the PC nuttiness may be falling away in the face of very real problems.  Have you noticed what’s left on the shelves?  A lot of kale-related products.  A lot of the over-the-top super-eco-friendly but way overpriced stuff.  The whole micro-greens section at Erewhon was untouched, and you know that last week people would have demanded to see the manager if the right kind of microgreens weren’t available.  Now?  We’re discovering what’s important, and what’s less so.  And there is silence on the whole “what is your pronoun” nonsense; the statistics regarding the virus are broken into two categories: male and female.  Imagine that!  As we’ve seen on Wall Street, markets get overblown and require “corrections” (this, clearly is more than that!) . But we’ve felt that culture, too, requires a “correction.”  The virus may be doing just that.

Fifth, I myself grew up on stories of World War II, the Holocaust, famines.  Anne Frank’s story had a tremendous impact on me, as I imagine it did most of us.  I was chilled at the story of Anne being holed up in the Annex, dependent on others for food, knowing that you had to leave your normal life and hide there because people wanted you literally dead and that the slightest sound at the wrong time could lead to your arrest and death, and the arrest of others.  I’d read and heard about the day and night bombings of Berlin, the blockade, the ferocious winters; the siege of Leningrad and the unimaginable horrors…. and countless, countless other periods of history where suffering was unimaginable. All these have contributed to my constant gratitude for pretty much everything I have, everything we have in our country today.

While what’s transpiring now is unprecedented, scary, stress-inducing, and filled with uncertainty, and making us take daily steps away from what we had once taken for granted, as well as ushering in clear, clear diminishment of freedoms — ah, it’s important to remind ourselves we are still so lucky.

Meanwhile, here are links to videos, books, singing, websites, all kinds of resources for your self-isolation edification and pleasure.  A few examples:

Looking to the future:

It’s impossible to know either the effects of the actual virus itself, or the effects of these measures.  But we must make sure, we have no choice but to make sure that whatever freedoms we’re losing now, that we fight to regain them when the dust settles on this.  We’ve fought for freedom before and we can again if we must.

We live in the greatest country on Earth; we are freedom-loving, entrepreneurial, inventive, optimistic and determined people and I have to believe this moment will provide opportunity for us to truly shine.

Take care of yourselves and your families. 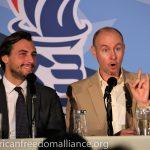