In recent years I’ve given countless talks on issues that relate to the defense and preservation – and more recently, the restoration! –  of these great United States of America and, in fact, of Western Civilization generally. I speak on issues that include the hijacking of the free press and how they’ve become tools – voluntarily, I might add – of the leftist agenda, preferring to propagandize rather than inform, to collude with those seeking to undermine our very foundations, rather to celebrate them. I speak of the corruption of education, these days an utter misnomer as it conceals what’s actually happening: the destruction of the identities and souls of our children, the degradation of all that is good rather than its elevation.

And inevitably, people ask, as they SHOULD: but what can we do, what can I do to make a difference?

It all seems so intractable, doesn’t it? The juggernaut of destruction is increasingly overwhelming, and comes at us from every direction, every avenue, in seemingly every conversation or interaction.  It seems hopeless, and we each feel that none of us can really make a difference. And we argue: even if we WERE to join in the battle to preserve our founding principles and those freedoms which contribute to this being the most extraordinary, exceptional nation in the history of mankind, what is that one arena that is the most important?

Is it the political realm, where we support candidates or policy campaigns?

Is it the judicial realm, agitating via lawsuits?

Is it cultural, engaging in the battlespace of ideas?

What about in the religious domain, working with churches or synagogues?

We know we have to “fight” but we have no idea how or where.

There is not one arena left unchallenged by the left, not one area of civic, spiritual or political life that’s left unassaulted: literally every aspect of our lives is contentious and embattled, from bathrooms to straws to advanced math to whether or not it’s white supremacy to be on time, to classical music to sports to disputing both the number and existence of genders.

There’s been a theft of beauty, of reason, of science, an undermining of identity, of family, of masculinity and femininity, a destruction of religion and the sense that there is something bigger than ourselves.

In short, wherever we turn, we’re being assaulted. Whatever we believe, we’re undermined. Whatever we think, we’re chastised at best, cancelled or purged at worst.

The bad news is, the enemy is all around us.

The good news is, regardless of the direction we take aim, we’ll hit something.

And that’s the important part.

There IS no “one right thing” to do when we “fight” to re-establish the foundations on which this nation was built.  ANY action, in ANY of these directions, chips away at their forward motion, and perhaps even advances some ground

We are gigantically in error if we cling to this notion that there must be “one big thing,” one “right” thing to do, to wait till we have discovered it, or that there is one true leader to follow to get us out of this disaster.

Instead, I’d ask you to consider this 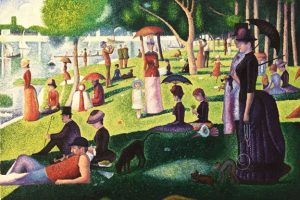 You walk into the gallery and you see it on the wall, and it’s a magnificent composition. You see a great lawn sweeping down to the river, groups of people sitting on the lawn, or strolling, with parasols in the sunshine, everyone in formal finery on this lovely sunny day. The sailboats on the river, and a rowing shell, reflect other forms of relaxation and savoring the outdoors. There are children, a dog, a butterfly.  A magnificent composition with rich colors, great depth, evocative of a peaceful afternoon.

But go closer, and what do you see? The entire composition is made of tiny, tiny dots.

Every part of the masterpiece is composed only of dots of varying size, color, depth, hue, and, taken as a whole, the entire image is a glorious one, radiant and warm. 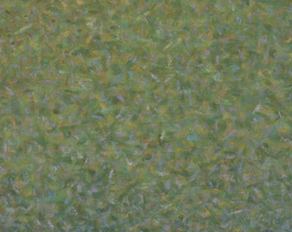 But notice! On the fields of green, for example,  it’s not all green, but there are elements of yellow, brown, white, to give it richness and dimension. The pink skirt has countless hues within it, including dabs of blue, bright 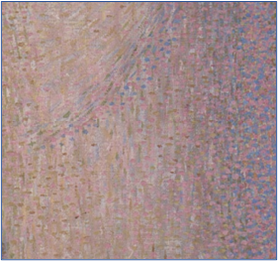 purple, even yellow, adding to the complexity and brilliance of the painting.

And this got me thinking:

None of us has to paint the entire picture of Western Civilization ourselves; we don’t have to have the ability to craft the entire portrait of FREEDOM on our own.  The saving of America, of our Judeo-Christian values, doesn’t rest entirely on our shoulders. All that we each have to do, though, is to be a dot in the rich portrait of freedom. We don’t have to paint the whole thing ourselves, but we DO have to contribute to it in some way – in ANY way!

If you feel that the political realm is the most crucial, you can run for political office – or if you’re not so inclined, find a candidate to support, either financially, as a volunteer, or emailing/phoning or being of assistance some other way.

Or you can reach out to your elected representatives in support, or in admonishment – any communication is a good thing; remember, they are public servants and represent US.

Alternatively, perhaps education is at the top of your list of concerns.  Reach out to the school board, the principal, the PTA.  Check out the curriculum, see what’s in the school library.  Find a parent’s group, or start one.  If you’re a parent or grandparent, check out local schools, and home schooling options.  See what’s being taught, read, advocated for.  Be engaged, be a voice for reason, for freedom, for real education, for the children.

One of the aspects of the Left’s destruction that’s egregious but seldom mentioned is their destruction of beauty.  So where there IS beauty – a local museum, public garden, music, opera or ballet company, readings of great works – support them with your attendance, donations, letters of appreciation!  And where museums, performance venues etc. have lost their way, celebrating the base, the ugly, the profane, be sure to reach out to them, too, and remind them that great art elevates, celebrates what is good, seeks to inspire, not to defile.  In other words, speak out!

In short, because the Left has made every aspect of our lives a battlefield, we have the luxury of selecting which battle to engage in; we can be a dot filling in the trees, or the river, or the skirt; we can help be a dot in the F, the R, either of the Es, the D, the O or the M of freedom. We don’t have to blend in, we can be a splash of yellow in a field of green!  We can find whatever level of interaction we are comfortable with, in whatever arena we feel is the most important to us.

We do NOT have to paint the entire picture.

The only wrong action is to take no action.

So go on out there. 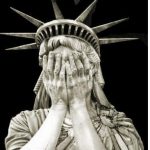 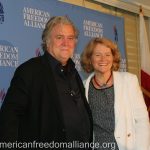 The attacks on AFA are emblematic of the state of the nationAFA News, Choose Freedom, Hate Speech, Intimidation, SPLC