Gates of Vienna’s Henrik Clausen Reports on the AFA Conference

One of the more fascinating aspects of the conference, and one that was mentioned repeatedly, was how a conference such as this would, incredibly, not be permitted in Europe.  The extent to which free speech has been silenced in Europe is shocking, especially as it relates to truth-telling about Islam.  Elisabeth Sabaditch-Wolff, Guy Milliere and Philippe Karsenty each have their own horror stories of persecution and prosecution for standing up for free speech, and each celebrated how we still, at least for now, can hold conferences such as ours.

Because of the scope of this conference and its overall value for those who are committed to this truth-telling, Henrik Clausen, a journalist for Gates of Vienna, came to Los Angeles from Holland to report on it.

At this one-day conference in Los Angeles, California, the local chapter of American Freedom Alliance presented a record-setting list of 19 ‘Islamophobic’ speakers talking about the current state of things between the West and Islam. Some of the speakers were very famous, such as Pamela Geller, Robert Spencer and John Bolton, some were less well-known, but they all shared a common concern for Western Civilization and the Islamic challenge. And each speaker had a unique perspective, with more to say than could fit into a single day….

One repeating theme was: “Are we winning this war, or not?”. Interestingly, the speakers had quite different opinions about this. On the negative side was the uncontrolled flow of Muslim refugees and the series of violent attacks we have seen. But on the other hand, it is becoming increasingly clear — even in the mainstream media — that the problem is real, serious, and is not going away by being ignored. And those politicians who still try to ignore the problems or lie about them are losing their credibility, leaving space for those who want to do something.

And take a moment to be grateful for our First Amendment and the free speech it (still) protects. 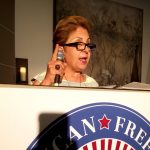 [Breitbart.com] – Wafa Sultan: ‘ISIS is Walking in the Footsteps of Muhammad’AFA 2016 Conference, News 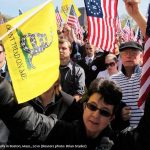