An old Cold War joke went that Russians under the Soviet Union had just as much freedom of speech as Americans, because any of either could yell “Reagan is an idiot!” in front of his country’s capitol building without consequences. A variant said that Cubans under Castro had equal free-speech rights as Americans under Bush, with the only minor difference being that Americans could also be free after the speech.

Freedom of speech has been the exception in human civil society for as long as there has been government. Public expression of ideas that are offensive to the powerful, or to the mob, has been a perilous exercise, under assault even in America throughout our history, punctuated by various legislative acts and Supreme Court rulings. In her 416-page monument to investigative journalism, The Intimidation Game: How the Left Is Silencing Free Speech, Kimberly Strassel of the Wall Street Journal dissects in enlightening (and at times, excruciating) detail how this epic drama has played out during the Obama era, especially since the most recent strategic inflection point of January 21, 2010, the case of Citizens United v. Federal Elections Commission.

Howard Hyde is a member of the American Freedom Alliance board of directors, is the President of the Southern California Republican Women and Men, and most recently is the author of Escape from Berkeley: An EX-Liberal Progressive Socialist Embraces America (and doesn’t apologize) 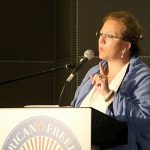