Do You Get It Now? Global Issues (Like China!) Matter

Lawrence Peck has been sounding the alarm regarding China and South Korea for years. He is without doubt one of the foremost experts on this issue, and his knowledge and perspective – and passion – are valuable to those of us who treasure freedom, and who understand that neither freedom nor the struggle for it exist in vacuums.  There is no doubt that threats to freedom are global, and affect us all.

The global catastrophe of the Wuhan Virus, or CoronaVirus if you prefer, has awakened us to this reality – when someone eats undercooked bat in China, the entire globe catches the virus.

Lawrence wrote a note expressing frustration, a frustration that resonates with us at AFA because we, too, address global issues, as, for example, in our last conference on Global Freedom Movements (where we had a panel on the situation in South Korea and a report from Hong Kong).   Threats to American Freedom don’t only come from within, nor do the threats we face exist only here.  Positioning ourselves in the global context can only serve to strengthen us.

There were folks in conservative/Republican circles in L.A. who didn’t get why I was raising alarm on China’s moves to dominate Korea, with help of Korean leftists like Moon, Jae-in and his Democratic Party.  Three or four local people in recent years even sent me notes, mostly very polite and well-meaning, but one I recall which was not so polite, informing me that they did not wish to receive any more emails from me regarding international issues, since they claimed such matters were “irrelevant” to our daily work as conservatives/Republicans here in California.  I vividly remember one local GOP activist, a dedicated but misguided fellow, standing up at a local club meeting  and declaring that we had better stop all talk of “foreign” issues, since they would never really impact our lives here in Southern California.

Do you think they finally “get it” NOW??

A couple of local conservative/Republican activists, good folks, told me quite frankly that they did not agree that issues like China or Korea had anything much to do with us here in L.A.  Ha!  Perhaps these folks, who doubted my warnings, now realize that I was just a tiny bit justified in what they called my “obsession” regarding these two anti-American and dangerous communist regimes in Asia.  Perhaps now, as we all sit at home, trying to conserve toilet paper, they finally”get” why for the past twenty years I have been so focused on this issue of threats from Asia.Sure, I know that “all politics is local,” and that as conservatives and Republicans it is also our explicit duty to try and get city councilmen elected in Monrovia and Modesto.

I simply hope that the local folks who didn’t “get it” before, and thought my focus was strange, now realize that global issues really can impact our daily lives!

Please don’t misunderstand me. We don’t have to ignore how we are directly impacted by China, just because we are involved in local politics in Chula Vista, nor do we have to forget about the struggle going on for control of Korea, just because we are involved in local races in Kern County.  If the crisis through which we are now suffering does not cause every conservative and Republican in L.A. and all of California to finally “get it” when it comes to how the fate of our nation and our very lives are inextricably linked to what happens in places like China and Korea, then nothing will ever will!

I am not saying “I told you so!”  I am saying that recent events have demonstrated that it is worth listening to what I have to say, even if it doesn’t have to do with electing a fellow Republican to the water board in Pismo Beach, or the city council in Visalia.

I just wish that now, the others here in our county, city and state, will finally “get it” as well, as they see nearly empty streets and offices, shortages of certain items in markets, crowded hospitals, and overworked medical professionals, as a direct result of things which happened in “far-off” East Asia.

Lawrence, it’s my guess more and more people are indeed “getting it.” 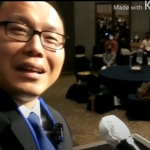