One of the best summations of the systemic failures that contributed to the catastrophe at Stoneman Douglas High School was researched and assembled, not by the professional media, but by student journalist Kenneth Preston.   One after another, his tweets outline failures, lies, coverups and intimidation.

A handful of students from Stoneman Douglas High School were elevated by the national media because they were quick to call for gun control and attack the NRA, but this effort has distracted from looking closer to home for answers to a shooting that claimed 17 lives.

The media has shown little interest in accurately reporting on a failure to keep the students safe, but a local student journalist, Kenneth Preston, has made a damning case against Broward County Public Schools Superintendent Robert Runcie and the school board — only to be met with attempts to intimidate and silence him.

Read the entire article and set of tweets here.  It is a shocking indictment of those charged with keeping our students safe, as well as of the media which has chosen to focus on gun confiscation rather than investigate where the real fault lies. 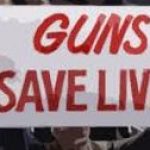 Forbes: Any Study Of ‘Gun Violence’ Should Include How Guns Save LivesAFA 2018 Conference, Gun Facts, School Shootings, Second Amendment